On the Edge of the Dark Sea of Darkness, North! Or Be Eaten, The Monster in the Hollows, The Warden and the Wolf King
Leeli Wingfeather (Leeli Igiby) (LEE-lee IG-ih-bee[1]) is the third child and only daughter of Esben and Nia (Igiby) Wingfeather. Because of the succession rules of Anniera, Leeli is the Song Maiden of Anniera. Her two older brothers are Janner and Kalmar (Tink). Leeli has a lame leg and a little black dog named Nugget, and she plays a musical instrument called the Whistleharp. Artwork of Leeli might alternate between her left and right leg being lame (sketches in the books show right, while the short film shows left), which unfortunately makes it difficult to say which of her feet are broken.

Leeli was born to Esben Wingfeather and Nia Helmer Wingfeather in the year 442 of the Fourth Epoch. For the very beginnings of her life, she lived in Castle Rysen, where she was born.

Sometime during the year that Leeli was born, Anniera was invaded by Fangs. Leeli and her family managed to escape the burning Castle Rysen. The Wingfeathers crossed the Dark Sea of Darkness and arrived in Skree, where they lived for nine years under the surname Igiby, their maternal grandmother's -Wendolyn Igiby Helmer- last name.

On the day of the Dragon Day Festival in Glipwood, Nugget (Leeli's dog) ran away. When Leeli found him in the grip of a Fang, she whacked it with her crutch and kicked it, earning her nickname Lizardkicker (etched into her new crutch made by Podo, hence the original was destroyed in the feat). The brothers, Janner and Tink, noticed she was gone when they heard her scream. They came to her aid, when suddenly, two rocks were thrown which knocked out the two Fangs torturing the children.

They returned home, where they told Podo what had happened. Podo called Leeli "Lizardkicker" before he and Nia moved to another room to discuss the events while the children had cheesy chowder. Nia at that time suspected it was Peet (Artham Wingfeather) who had thrown the rocks at the Fangs and saved them, but she told Podo not to tell the children. Only she and Podo knew the real connection that Peet had to Nia's children.

Throughout the series, Leeli is a excellent musician with her ability to empathize with others and spiritually bind with those of the Annieran bloodline when she performs. She is very kind-hearted and compassionate (especially towards animals), but that, her vigor, and her agility make up for her disability. 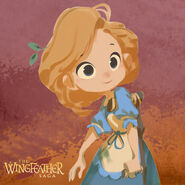 Leeli Avatar from the Short Film 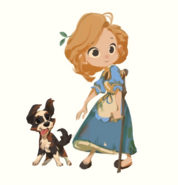 Leeli from the Short Film

Leeli with her siblings

Leeli pictured on the poster for the short film

Leeli pictured on the cover of The Monster in the Hollows
Add a photo to this gallery
Retrieved from "https://wingfeathersaga.fandom.com/wiki/Leeli_Wingfeather?oldid=7405"
Community content is available under CC-BY-SA unless otherwise noted.