Janner Igiby (Janner Wingfeather) is the 12-year old firstborn son of Esben Wingfeather and Nia (Igiby) Helmer. As the oldest child, he is expected by his parents to protect his two younger siblings, Kalmar Igiby, nicknamed Tink, and Leeli Igiby. Because he is the oldest child in the Annerian royal family, he is the Throne Warden of Anniera, whose only duty is to protect his younger brother the king.

When the Fangs advanced again, however, they moved on to Dugtown, then Kimera, and even to the Green Hollows.

From there, Janner and his brother Kalmar infiltrated Gnag's castle and attempted to stop him. However, their mission failed and they were captured by Gnag, who took them and their sister Leeli to Castle Rysen. There Gnag used Janner and his siblings' powers to open the Fane of Fire, from which Gnag retrieved a large portion of holoré. Janner and his siblings returned with Gnag to Ban Rona, where, with the help of the sea dragons, they defeated Gnag. 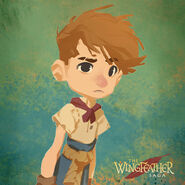 Add a photo to this gallery
Retrieved from "https://wingfeathersaga.fandom.com/wiki/Janner_Wingfeather?oldid=4838"
Community content is available under CC-BY-SA unless otherwise noted.