The dreaded Fangs of Dang are strange creatures that make up Gnag the Nameless's army. Gnag created them by melding humans and animals, using the Holoré and the Holoél. The Stonekeepers have attempted to breed many animals with humans, but there are three major successful breeds of Fangs: Green Fangs, Gray Fangs, and Bat Fangs. When Fangs die, they turn to dust.

Green Fangs are melded from lizards and are the first and most common of all Fang breeds. A Green Fang has greenish scales, a lizard-like snout and tail, and two long venomous fangs. They were used as the primary soldier in Gnag's army during the Great War and afterwards for nine years until they were gradually replaced with Gray Fangs. They were replaced because they were greatly slowed in cold weather and were not as intelligent as their gray counterparts.

The most prominent Green Fang was General Khrak, who led the assault on Skree during the Great War, and who was the general over all Green Fangs. He governed Skree from Castle Torr in Torrborro. Said to be quicker in mind and body than most Green Fangs, General Khrak was one of Gnag's oldest servants.

Gray Fangs are melded from wolves. They were created by Gnag to attack Kimera, which was located in the Ice Prairies, a too cold climate for Green Fangs. Gray Fangs eventually replaced most of the Green Fangs when they took part in the battle at Ban Rona.

Bat Fangs are melded from bats. They were first used in the battle at Ban Rona, where they attacked the Hollowsfolk from the air. They also teamed up to carry in some Gray Fangs to the battle. Bat fangs cannot see, but have a very keen sense of smell and hearing.

Fangs are bred with the Holoré and the Holoél. The human who is bred into a fang is led into a small chamber with the animal that it is to be melded with. The Stonekeeper then leads them in song and exposes them to the light of the Holoré or the Holoél. When the song is finished, the animal is melded into the human to make a Fang. The animal used for melding is often used to make several Fangs, and is then discarded. 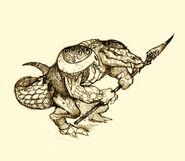 Slarb
Add a photo to this gallery
Retrieved from "https://wingfeathersaga.fandom.com/wiki/Fangs?oldid=4880"
Community content is available under CC-BY-SA unless otherwise noted.