Larger than a Ship

Dragons are some of the oldest creatures in Aerwiar. They have very long lifespans, are Sentient, and have had a longstanding correlation with Anniera, as shown by Anniera's crest. Members of the Annieran Royal Bloodline are able to communicate with dragons telepathically. Dragons are also drawn towards music. The current leader of the dragons is Hulwen. They are often considered sacred for unknown reasons.

During the First Epoch, the dragons lived in a large kingdom in the mountains ruled by Yurgen. At that time, they flew freely in the air. Ouster Will slew Yurgen's son near the end of the first epoch. He claimed that Yurgen's son could be healed through the power of the Ancient Stones. Yurgen and the other dragons delved into the earth in search of the stones. Eventually, they where found, but the digging had shifted the entire surface of Airwear, separating Anniera from the rest of Dang, sinking the Mountains, and causing the disappearance of the First Well. The power of the stones was not enough to heal Yurgen's son, though. Yurgen moved the dragons to his now sunken kingdom, in order to protect them.

After centuries of living in the Dark Sea of Darkness, the wings of dragons became more like fins, and they lost their ability to fly. People began to pay high prices for every part of the dragon. Painters wanted dragon whiskers for creating paintbrushes. Dragon teeth were used to create pikes for elite soldiers. Dragoneering became a popular trade, because it could make a person extremely wealthy. The hunters only hunted young dragons, or sqwyrms. Full grown dragons, or wyrms, were far too large to capture. Eventually, dragon hunting was banned, but the dragons still became even more reclusive.

On the Edge of the Dark Sea of Darkness

The dragons are seen during the Dragon Day Festival when Leeli sings Yurgen's Tune to them.

North! Or Be Eaten

Yurgen intercept the Wingfeathers' escape from Kimera, ordering his daughter, Hulwen, devour Podo Helmer for the crimes of his dragoneering past. She refuses, and helps Leeli Wingfeather convince Yurgen to give Podo one more journey acress the Dark Sea of Darkness. Yurgen abides, but promises that he will not be merciful when he met Podo again.

The Warden and the Wolf King

Gnag the Nameless orders Leeli to play "Yurgen's Tune." She abides, after many threats, and Yurgen arises from the sea. Gnag offers the skull of Ouster Will in exchange for an "alliance." Gnag then melds himself with Yurgen. The dragons, now led by Hulwen, join the Hollowsfolk in the battle against Gnag. Oood the Troll joins the battle near the end, along with Cloven, and water from the First Well. He uses the water to restore the fins of the dragons to wings.

After the Wingfeather War, Hulwen finds the Ancient Stone used to meld Gnag, which was taken by Murgah and Amrah. At the end of book four, we see Sara Cobbler and the Wingfeathers boarding Hulwen to go on a quest to find the First Well and heal Janner Wingfeather.

Yurgen depicted in the Short Film 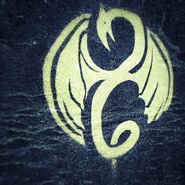 Add a photo to this gallery
Retrieved from "https://wingfeathersaga.fandom.com/wiki/Dragons?oldid=6828"
Community content is available under CC-BY-SA unless otherwise noted.